He is Not Here, He is Risen

Many Christians seem content to leave Jesus on the cross, while the resurrection often suffers from neglect. That the cross receives so much attention, however, is not without warrant. After all, the event was the “one act of righteousness” that led “to justification and life for all men” (Rom. 5:18). That is to say, the one Man’s act of righteousness is the climactic act of Jesus’ life-long fidelity to His Father’s will and purpose, when He offered up His life for His people. Taking it one-step further, many of us are inclined to say that we will live under the public disgrace and outrage of the cross until Christ’s return, that it defines the age in which we now live. Since we live in a suffering world, as the thinking goes, the crucifixion provides the perfect revelation of God’s empathy with His creation. Yet the whole reason that the one act remains pivotal is precisely because Scripture deems it the decisive victory by the One who hung dead upon it. But what kind of victory would have Christ hanging upon it still? Wherein lies the triumph in the story of a disillusioned Galilean who could not get God to establish His kingdom on earth? There is none. Without the resurrection, the cross is foolish indeed.

All of this to say that the cross itself is entirely inseparable from God’s other redemptive acts through Jesus in history — His life, death, resurrection, ascension, and the outpouring of the Holy Spirit at Pentecost — all of these form a unified front upon which the age of sin and death met its match. And never was the defeat of those two horrors more boldly proclaimed than on Easter morning. The resurrection stands as the single, most powerful declaration by God that this truly human Jesus “delivered up according to the definite plan and foreknowledge of God,” was also “the Son of God in power according to the Spirit of holiness” (Acts 2:23; Rom. 1:4). Jesus and His mighty works were vindicated when God raised Him from the dead, exalting Him as “both Lord and Christ” (Acts 2:36), no longer lowly and limited, now Messiah of His people and Ruler of the entire world.

If the resurrection did not happen, then we followers of Jesus, along with Saint Paul, “are of all people most to be pitied” (1 Cor. 15:19). In other words, if Christ has not been raised we are the most wretched, unhappy, sorry lot the world has ever seen, because we have believed the cruelest deceit — the hope of a glorious salvation when all we are truly left with is sin, weeds, and death. But happen it did, and it is believed, for Jesus Himself said, “Blessed are those who have not seen and yet have believed” (John 20:29). This was, of course, the very reason the apostle John wrote the gospel: “These are written that you may believe that Jesus is the Christ, the Son of God, and that by believing you may have life in his name” (v. 31). The resurrection is part and parcel of that Gospel message of life in Jesus’ name. It is non-negotiable. One cannot consider himself or herself in line with “apostolic Christianity” without affirming the bodily resurrection of Jesus of Nazareth. This is the clear testimony of the New Testament writings, captured most succinctly in Romans 10:9: “If you confess with your mouth that Jesus is Lord and believe in your heart that God raised him from the dead, you will be saved.” Those who would deny it, while being treated with “gentleness and respect” (1 Peter 3:16), must not be countenanced at the table of fellowship; their professed “Christianity” should not be acknowledged.

The question that faces us, however, is not about its evidence; rather, it is about its meaning. What significance does the resurrection of Jesus have in God’s redemptive plan?

In simplest terms, the resurrection overturned the curses of the Fall (sin, weeds, and death). Not just the resurrection itself, however, for included in that event is that which led up to it: both the obedience of Jesus to His Father’s will (sometimes called “active” obedience) and His obedience unto death (“passive” obedience). In the former, Jesus’ role as the second Adam is clearly displayed. This Messiah sent from God defeated the sin of Adam’s disobedience with His own perfect obedience to what Israel had collectively failed to do, namely, keep the covenant.

When Adam disobeyed the divine command, God sent Abraham and the nation of Israel after him to usher in the light of the Gospel of God’s salvation (see Isa. 41:8–9; 49:3–6). Failing this, Jesus came as Israel’s representative; He could do this because He was sent as the Christ (“anointed one”). In Israel, the anointed one, or king, was both the representative of the nation to God, as well as God’s chosen representative to the nation (for example, 2 Sam. 19:43; 20:1). As such, like Israel (see Isa. 63:16), the king was God’s son: “I will be to him a father, and he shall be to me a son” (2 Sam. 7:14; also Ps. 2:6–7). The king of Israel, of course, was not deified like the Pharaohs of Egypt (unlike Jesus, who is the God-man). Thus for Jesus, being the Christ meant that He so closely identified with His people that whatever can be said of Him can, at least in principle, be said of them.

For Christians (both Jews and Gentiles, see Rom. 9:4–8), then, this means that they participate in God’s covenant, becoming by faith heirs of His promises, faithful to His will and purpose, precisely because Jesus already was. The apostle Paul meant nothing less when he wrote that we have been “baptized into Christ Jesus” (see Rom. 6:1–14). Finally, the gift that flows from this perfect fidelity on Jesus’ part is the gift of life itself (“the last Adam became a life-giving spirit,” 1 Cor. 15:45), and brings us back to what Saint Paul described as the “righteousness [that] leads to justification and life” (Rom. 5:18).

It is in Jesus’ obedience unto death that the contrast between the first and second Adam amplifies. “The free gift is not like the trespass” (Rom. 5:15). Indeed, it is far greater; the abundant grace of God completely overshadows the trespass of Adam. But how would that grace come? The charge from God to Israel, as stated above, was to live in covenant with Him as a means for them to defy the curse and destruction of Adam’s fall. But in this matter the apostle said, “For I do not do the good I want, but the evil I do not want is what I keep on doing” (Rom. 7:19). That is, “the good” keeping of the Law always gave way to “the evil” breaking of the Law as long as Adam remained Israel’s representative. And so they failed. Still, the necessity of the Servant’s work remained if sin was to be conquered and the old Adamic man redeemed (see Isa. 53:11). Who has delivered us from this body of death? The answer? “Thanks be to God through Jesus Christ our Lord!” (Rom. 7:25). Jesus came and perfectly fulfilled the will of God, even unto death. In so doing, He reversed the faithlessness of Adam, starting in His resurrected life a new family of God that would bear His characteristics instead, and turned a fallen, corruptible world on its path toward renewal (see Rom. 8:21–22).

So, one major point of all this today is that, being baptized into Christ Jesus, we too share in His victory and exaltation (Rom. 6:1ff.). Not only was sin defeated by the perfect obedience (right through to the resurrection) of Jesus, death was destroyed as well. For death received its sting from sin. It is as if death had the rug pulled right out from under its feet, subsequently powerless to keep Him in the grave. Along with this came the guarantee that those who die once, if they are in union with Christ, will never die again. The pre-eminent resurrection, in other words, was the “first fruits” of the great resurrection to come (see 1 Cor. 15:12–33; 51–57). In this way, the ransomed Christian partakes of Christ’s exaltation, being put right with God and His law, reckoned righteous before the holy Judge.

Thus the third day, Easter morning, witnessed the dawn of a new day. Yet it was not just a new day unlike any other preceding it; rather, it was a day that carried within it the very future to which it pointed. The old war-analogy comes to mind: victory has been proclaimed, the war is nearing its end, though sin and death have yet to hear the news, and we battle them still. But they are not to be feared; we are their slaves no longer. The victor, Jesus, has destroyed the yoke of sin and death, having had that burden laid upon Him. The story of Jesus’ literally empty grave not only confirms the hope to which we cling, it simultaneously offers even now the future resurrection life to each person found in Christ. The uncertainties and chaos of this world, while at times oppressive, must not give us constant despair. There is no room for that in the life of the one who believes in God’s victory through the exalted Christ Jesus. As hard as it is, amid the mourning and empathy of tragedy, we are to thank God in light of the promise: the new creation, heaven on earth. Thus we routinely proclaim the faith each Lord’s Day: “Christ has died; Christ is risen; Christ will come again.” There will come a day when the weeds will be choked-out by the sweet grape vine, true justice will reign, and once-wretched sinners will do naught but live resurrected, perfectly and humbly in the presence of the Almighty. 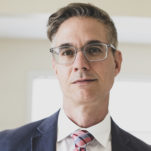